Why Poland? There’s More to This Country Than Pierogi!

On November 11, 2021, Poland celebrated 103 years of Independence or Narodowe Święto Niepodległości in Polish. In the late 18th century, the Polish-Lithuanian Commonwealth was divided between the Habsburg Monarchy, the Kingdom of Prussia, and the Russian Empire and Poland ceased to exist for 123 years. Because of the destruction of the neighboring powers at the end of WWI, National Day in Poland is celebrated each year to commemorate the anniversary of the restoration of Poland’s sovereignty as the Second Polish Republic in 1918 from the German, Austro-Hungarian, and Russian Empires. 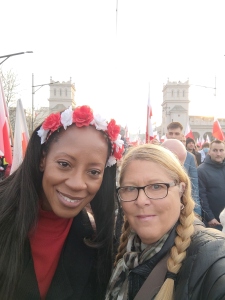 In recent years, there has been an Independence March through the streets of Warsaw. It begins near the Palace of Culture and ends about 3 km away at the National Stadium. Me being me was naturally curious about this event. Mentioning it to students I was told it was best to stay home. Why I asked. They said sometimes trouble arises from extremist groups and it may not be safe for foreigners. As the day was approaching, my friend Tamara asked if I was going to the March. Now me being fair-haired with blue-green eyes, I kinda sorta blend in with the Polish population, that is until I speak. Tamara being a black woman, not so much. This would be the 4th year Tamara has attended the March. Her experience in past has been nothing but positive, so I decided to take others’ opinions with a grain of salt and meet her and 150,000 of our closest friends to celebrate Poland. What I witnessed was men, women, children, and seniors all decked out in white and red, waving flags and celebrating a country and a heritage they are proud of. I’m sure there were some hooligans around and some extremists with their anti-this and anti-that slogans, but we witnessed nothing but Polish people celebrating their independence. 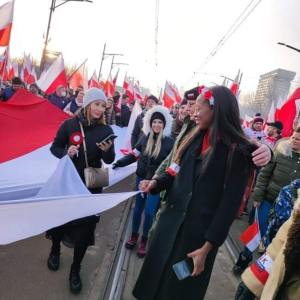 The next day, I read and heard from others that indeed it was a peaceful celebration with less than 10 people being detained for causing trouble. The whole length of the March people were talking to us (thankfully Tamara knows a bit of Polish) and she was constantly asked to take photos with people. She became an internet sensation (many of my students commented that my friend was all over the internet) and there was even an article written, “Who is the Black Woman at the Independence Day March?”.

Why am I telling you about this? I often get asked, “Why Poland?”. Why have I decided to live in Poland? My original plan was to stay in Asia or more specifically SE Asia, but circumstances brought me here, to Warsaw. I started out talking about Independence Day and the March because it reinforced my views of this country I have come to call home. I also happened to start this blog a couple days after the march. I thought I would probably stay in Poland for a year or a year and a half, thanks to the pandemic I have been in Poland for nearly 2 years with plans to stay longer as I discover more and more reasons to answer, “why Poland?”.

I have probably mentioned that Warsaw is a great city. Poland’s capital is home to about 1.8 million people and 85% of the city was destroyed by the end of WWII. Most of Old Town Warsaw, including the Royal Castle, was destroyed. It was meticulously rebuilt using as many original bricks as possible and studying original architectural plans, photos and postcards. The rubble was even sifted through to gather reusable decorative items which were returned to their original places. Warsaw is home to 41 museums and 71 universities offering 983 study programs. It’s no wonder it attracts a large number of international students. Warsaw ranks in Europe’s top ten greenest and most eco-friendly cities. One of my favorite things about Warsaw is the fabulous public transportation system.

What about the rest of Poland? Poland boasts 17 UNESCO World Heritage Sites with the Historic Center of Krakow being the first recognized in 1978 and in 2021 the Ancient and Primeval Beech Forests of the Carpathians were added to the list.

Built during the 13th century and measured by land area, Poland is home to the largest castle in the world, the Castle of the Teutonic Order in Malbork. 90% of Poland’s population has completed at least secondary education. In 1901, two Poles, Jan Szczepanik and Kazimierz Żegleń gave the world the bulletproof vest. In 1923, Warsaw-born Leo Gersenzang who in his 20’s emigrated to Chicago, invented cotton buds first calling them Baby Gays and later changing the name to Q-Tips. In 1887, a Pole of Jewish origin, Ludwik Zamenhof, is credited with the invention of the world’s most artificially created language, Esperanto.

Alicja Englard was born in 1923 in Piotrków Trybunalski, Poland. During the war and occupation she studied philosophy in Warsaw. Surviving WWII using fake Aryan documents, she finished her doctorate in Basel Switzerland. Her dissertation on the lives of many dictators and despots like Hitler, Mao and Stalin came to the conclusion that every dictator was in fact a child victim of violence in the past. Her views on the ill effects of child beating were met with great speculation in Europe, which was more than accustomed to corporal forms of punishment. Because of her perseverance, Alicja Englard laid the foundations for what would later become law prohibiting violence against children or Children’s Rights.

Poland has a horrific history, some of which I have written about. Poland also has beautiful traditions, especially this time of year, the magical season of Christmas. As you may have figured out, I am finishing this blog over a month after I started and it is now Christmastime. In the spirit of the season, my English lessons leading up to Christmas, I asked students to share memories of their past celebrations.

I heard stories of live carp in the bathtub, fish scales placed in wallets, “less pierogi, less stress”, families playing board games, watching Kevin in “Home Alone” and even a grandma browsing the “Kama Sutra” someone had purchased for their recently married brother. Hearing these stories made me want to learn and understand the specialness of Christmas Eve and wiglia in Poland.

Unlike in the United States, most Polish Christmas celebrations, including the exchange of gifts, take place on Christmas Eve. The celebration begins with Wiglia or Christmas Eve dinner. Wiglia begins when the first star appears in the sky which is to remind everyone of the Star of Bethlehem. I was also told stories that the children were sent to the windows or outdoors to watch for the twinkle of the first star. It was then that Santa would sneak gifts under the tree.

Once the first star has been seen, the family gathers around the table. There is an extra place-setting at the table for the unexpected guest, to celebrate hospitality. Tradition has a small handful of hay placed under the tablecloth to symbolize Jesus’ birth in a manger. The feast then begins with grace and the breaking of the opłatek which is a Christmas wafer.

Nothing will be eaten until all guests have broken the opłatek and exchanged wishes for prosperity and good health in the coming year. Traditionally the wiglia consists of 12 dishes, 12 being a symbol of wealth and also representing the twelve Apostles. During the meal, all guests should have a taste of all 12 dishes to ensure good luck in the 12 months of the coming year. This is where I would have a problem. Nearly all the dishes contain either mushrooms or fish (remember the carp in the tub?) and I am not a fan of either. So, I guess I would only have about 2 months of luck. The Christmas Eve dinner is also void of meat.

I also learned about a dish called kutia which is a mixture of cooked wheatgrains (wheatberry), cooked poppy seeds, honey, dried or candied fruits soaked in a small amount of port or red wine, and various nuts and seeds. This dish got mixed reviews from my students and seems to differ by region. 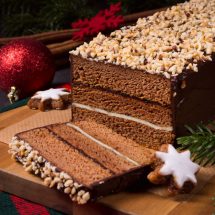 No wiglia would be complete without piernik or old fashioned gingerbread. Dating back as far as the 17th century, records of gingerbread can be found in the ancient city of Toruń, birthplace of Nicolas Copernicus. You might also be served poppyseed cake called makówki and finish the meal by sipping compote. Compote is made from cooked dried and smoked fruits – typically plums, apples, pears, raisins and apricots. It is supposed to help speed up digestion. The rest of the evening may be spent sharing songs and stories around the table until it is time for Pasterka or midnight mass. 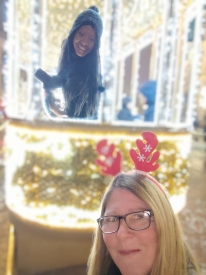 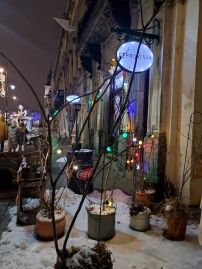 That is a brief explanation of a typical Christmas Eve here in Poland. Although I didn’t experience wiglia, (I’m not complaining as I mentioned I don’t do mushrooms or fish) I did experience a lovely Christmas Eve. I met up with my friend Tamara (from the Independence March). We started in Old Town Market Square grabbed a hot cup of grzane wino or mulled wine and watched the city light up. We strolled through Old Town looking at the lights, listening to a saxophone player under the grand tree in front of the Royal Castle. We stopped for a cup of hot cherry vodka (that stuff is delicious) to continue our walk past the Presidential Palace and then up Nowy Świat (New World Street). Basically we walked what is known as the Royal Route. Warsaw was magical on Christmas Eve with lightly falling snow, sparkling lights everywhere and the spirit of the season was felt in everyone we passed.

We finished the evening at a 24 hour diner, one of the only places open on the eve of Christ’s birth.

Unlike Polish tradition of a meatless meal, we chowed down on giant burgers, French fries and red wine. Pretty perfect in my American in Poland eyes.

So back to my original musing…..Why Poland? When I moved here in February 2020, I would have said, “I don’t know, its Europe…I can run off to Paris for a weekend…I like Europe… I had a job offer.” 22 months later, I say, Poland is a beautiful and amazing country and I am trying to immerse myself in its culture. I like it here, I feel at home….why Poland? Why not Poland?

“To move, to breath, to fly, to float, To gain all while you give, To roam the roads of lands remote, To travel is to live.”

13 thoughts on “Why Poland? There’s More to This Country Than Pierogi!”