Warsaw or Warszawa in Polish is the capital and largest city in Poland.  It sits on the Vistula River in the east-central part of the country with a population of about 1.8 million residents. If you take into consideration the greater metropolitan area, it comes in at 3.1 million people. 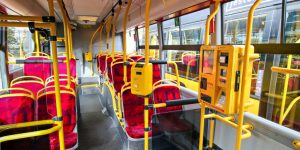 The first time I came to Warsaw was for 3 cold grey days in November 2014.  Knowing little about Poland and even less about Warsaw, I booked a hotel that was on the outskirts of the city about 15 km from the center.  So how do I get to the city?  I knew I wanted to go to Old Town but knew little else.  I don’t think I had a clue about Uber, let alone an app.  I don’t recall much English being spoken, but somehow, I managed to find out I could go to a bus stop near the gas station next to my hotel.  I made it into the city and exited the bus near the Palace of Culture and Science.  I honestly don’t remember how I got around other than I used public transportation.  Not speaking Polish, I somehow figured it out, got around the city, and made it back to my hotel each night.

February 3, 2020, I arrive in Warsaw for a second time having committed to working for English Wizards teaching, you guessed it… English.  This time for a bit longer than 3 days.  Actually, I had no idea how long I would be staying…18 months was my guess at the time.  Who knew a global pandemic would stop the world and that I would love Poland and decide to stay for an indeterminate time? With a bit more luggage than my last visit of three days and armed with a smartphone and the Uber app a car quickly pulled up and whisked me away to my temporary Airbnb digs in the Warsaw suburb of Ursus.  Walking distance from my flat I was able to stock up on the “bare necessities of life” (sung in your best Baloo voice).  I would be in my temporary residence for 3 weeks which would give me time to firm up a job offer and find a flat to rent long-term.  I had a job interview for a language school that first week.

Still not familiar with the public transportation system, I took an Uber to my interview.  I was offered a job in the office that day. Next step finding a flat in the city center as I would be teaching Business English at several companies in Central Warsaw.  I decided I better ask about public transportation.  Even though Uber is reasonably priced, it can add up rather quickly.  I got the best piece of advice before I left the office that day…download an app called Jakdojade –  https://jakdojade.pl/lista-miast.

Jakdojade is a public transportation app that provides detailed directions and transport options for most cities in Poland. I have used the free version for almost a year and a half and haven’t felt the need to upgrade to the paid version.  The paid version has no ads.  So, how do you use it?  Since it is a mobile app, you will need an Android,

Windows or iOS smartphone and an active data connection.  After downloading the app, you will need to create a profile and set up a payment method(s).  There are options to put funds in a wallet, use BLIK (through my local bank), google pay, or add a card.  I have all 4 options set up.  Now let’s go somewhere….

You can choose the current location or physically enter a starting point.  Then enter where you want to go.  There is also an option to choose from on the map.  After putting in the starting and ending points there are some other options available.  You can change the time if you are looking for a future departure or if you prefer a certain mode (bus, tram, metro or train) you can select those now.

I’m usually looking for something at the current time and although my favorite mode is the tram, I leave all options open and usually choose the quickest and the one that has the least walking to and from the stops. Now you will most likely see an ad and below that an arrow.  Touch the arrow and you will be shown available options. Once you choose the option that best suits you, you will see a schedule of stops on the way to your destination and if you have to change trams or bus to tram, etc. It also tells you how soon the departure is.  Next, you will choose Buy Ticket.  It will also show you the price of the ticket because depending on your destination you could need a 20-minute ticket or a 75-minute ticket (there is no in-between). You will be asked if you want to validate the ticket.  Only do this if you are already on the bus/tram. In Warsaw, it has recently been changed so you must validate the ticket when you board the vehicle.  This is done by scanning a QR code inside the tram/bus.  This can be tricky and has caused complaints from users.  If you don’t scan in a certain amount of time, the application locks you out for a few minutes.  QR Codes are often placed high and above the handrails that you hold on to.  Yes, I have been locked out and have just waited until it unlocked and then re-scanned.  I keep my fingers crossed the transportation police don’t decide to board and check tickets while I’m locked out. 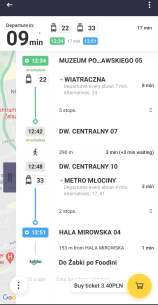 Once onboard, you will also find signage showing the entire route and you can follow the stops.  There is usually an announcement (in Polish) telling you the current and next stop. On the main page when you open the app, along the bottom is Trip, Schedules, and Tickets.  It defaults to trip which is where you can enter starting and ending points.  You can also view schedules that take you to a page and you will choose, tram, bus, metro, or train and then the route number you would like to view and it will show you all the stops from start to finish.

Finally, if you know your route, you can just press tickets and you will have the option to purchase 20 minutes, 75 minutes, 90 minutes, one day (zone 1 or 1&2), three days (again with zones), weekend and group tickets.  Warsaw transportation has two zones.  Most likely you will only need zone 1 which covers Warsaw and several municipalities.  Zone 2 consists of towns and villages outside of Warsaw.  When you choose the ticket option in the app, it will also show if you have any previously purchased and unused tickets.  If you do, you will have the option to validate them here.

If you use the app to purchase a ticket to use the metro, you will be given a code in the app to scan before entering the metro station at the turnstile.  Also, if you aren’t traveling alone, you have the option to buy multiple tickets at once.

It’s really not as complicated as it might sound.  If you haven’t set up any payment options or choose not to use mobile payments, the app is still great for checking routes and getting directions.  If you just use it for directions, tickets can be purchased at machines located all around the city and in the vehicles themselves. These will need to be validated after boarding. I will cover how to purchase these tickets and also the Warsaw Card (for long-term usage 1-3 months) in a future post.

I have found Warsaw transportation to be very user-friendly and quite convenient.  I mostly use the Jakdojade app during the winter months when I am not out and about as much.  In the nicer weather, I use my Warsaw Card and usually purchase 1 month at a time.  Once in a while, I can’t get a mobile signal and need to purchase a ticket at the machine or onboard.  My personal favorite are the trams. 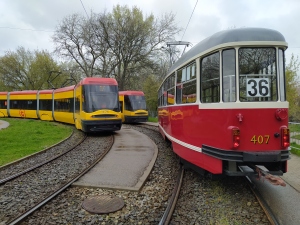 In the summer months on weekends, they even run the historical trams on a “tourist route” (line 36).  If you choose you can leave me here as I am just going to tell you some useless but interesting information on Warsaw Trams.

The Warsaw tram network is a 132-kilometer (82 mi) tram system serving a third of Warsaw and serving half the city’s population. It is one of the largest in Europe operating over 750 cars. The history of tram transport in Warsaw dates to 1866 when a 6-kilometer (3.7 mi) long horsecar line was built to transport goods and passengers. In 1899 the entire tram system consisted of 30 kilometers (19 mi) of tracks with 234 tram cars and 654 horses operating 17 lines. By 1903, plans were drafted to convert the system to electric trams, which was done by 1908. On August 1, 1944, with the outbreak of the Warsaw Uprising, the use of trams was suspended and the cars were used to build barricades.

In 1965, Warsaw saw the introduction of two-car trains and in 1977 three-car trains were added to line 36.  On June 23, 2005, the city launched the first water trams on the Vistula.  This summer the first 2 new trams will be arriving from the Republic of Korea with an additional 121 arriving between the beginning of 2022 and April of 2023.

Women have been working on the Warsaw Trams for 76 years. They were employed for the first time as conductors in 1942 when the men were taken to work by the occupiers. After the war, in 1949, the first course for a tram driver was organized. Since then, the employment of women in the Warsaw Trams has increased. Of the 1,400 tram drivers, 294 are women. There are 36 women in traffic supervision. The entire company employs 748 women, which is approximately one-fifth of all employees.

If you made it this far, thanks for humoring me and my fascination with the trams in Warsaw.  If you find yourself intrigued, you can read more about the trams here: https://tw.waw.pl/