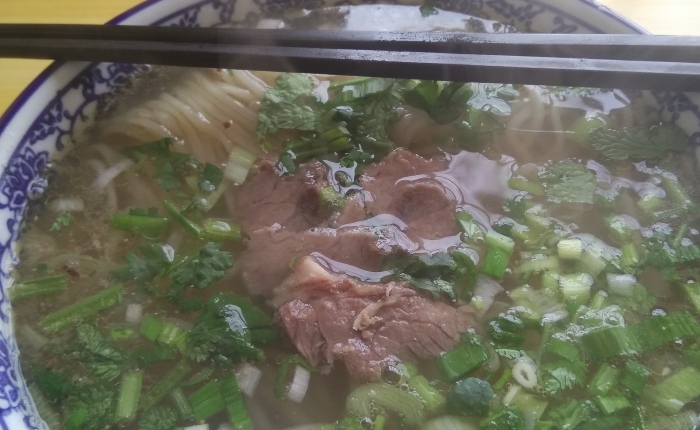 Okay, so it isn’t really a secret considering there are over 1000 noodle shops selling over one million bowls of 牛肉面 Niúròu miàn (beef noodles) per day in Lanzhou alone, according to xinhuanet.com. The secret being, how do they make it look so simple? Noodle pulling, that is. Although, after reading many blogs and articles on Lánzhōu Lā Mǐan (Lanzhou pulled noodles), it appears you may have to give up your first born and sign off in blood to get the “true” recipe that has been passed down for centuries and is written on cowhide and hidden away in some Lanzhou grandma’s basement. Just kidding of course, but people from Lanzhou insist their noodles are the only authentic ones. Whenever I travel to a new city in China, I usually ask for a Lánzhōu Lā Mǐan shop. I can say that traveling far and wide every Lánzhōu Lā Mǐan shop I have where I have eaten, has served me almost identical soup. Taste, texture, ingredients have always been consistent. Before, I get into my attempt at Lā (pulled) Mǐan (noodles) a little of what I have learned in this endeavor.

Why noodles? I think most people in the Western World equate China with rice more so than noodles. It is true China produces more rice than any other grain. With 75% of China’s population being farmers, rice is just less than 50% of all crop cultivation. There is also a distinct agricultural dividing line, rice is predominantly grown in the south while wheat is grown in the north. I found it extremely interesting to learn that only 15% of China’s land can be cultivated. This 15% also supports 20% of the world’s population and leads with 30% of the world’s rice population. The divide of rice and wheat into north and south sectors goes as far back as the Han Dynasty which reigned from 207 BC to 200 ad. According to the Wall Street Journal, a study conducted by psychologists for the Journal of Science, there is a difference in personality and traits of people of the north and south. People in the north that grow wheat and are “noodle eaters” are more individualistic and are more analytical in thought while rice growers/eaters in the south tend to be more traditional and more holistic in thought with lower divorce rates. I do have rice occasionally but living in the north has fueled my noodle addiction.

Lanzhou is the capital and largest city of Gansu Province in Northwest China. Many of the lamian restaurants are owned by Hui ethnic families from northwest China. The Hui people are predominantly composed of Han Chinese and adhere to the Muslim faith. Therefore, many lamian restaurants are also halal and are the most common halal restaurants in eastern China. Centuries ago, noodle makers in Gansu learned that certain kinds of ash, called peng, had the effect of tenderizing dough, but more about that later. A young Hui man who sold the hot soup noodles topped with beef on the streets of Lanzhou during the Qing Dynasty is credited with developing the dish in its current form. Mao Baozi’s noodles became so popular that they literally define the traditional characteristics of the dish! In 1919, Mao Baozi opened his first restaurant in the city, leading to the eventual growth of thousands of beef noodle restaurants in Lanzhou. Outside of Lanzhou and Sichuan province, such noodle shops carry the title of 兰州正宗拉面 (authentic Lanzhou hand-pulled noodles), while in Lanzhou itself they are simply called beef noodles (牛肉面).

In order to be called authentic Lánzhōu Lā Mǐan, there are certain rules so to speak. Mao Baozi’s dish was said to be “1 clear, 2 white, 3 red, 4 green, 5 yellow” (一清、二白、三红、四绿、五黄) to signify respectively clear soup, white radish, red chili oil, green coriander, and yellow noodles. (Using the alkali ash or peng hui imparts a yellowish tint to the noodles, which actually do not use egg.)

This post came about because of the peng hui. I usually eat at my local shop at least twice a week. On Sundays, I am in the city of Liaocheng and go to a noodle shop there for Niúròu miàn. Although I have had many different beef noodle soups all over China, the Lánzhōu version is easily my favorite and I have on occasion called it my crack. When my Lā Mǐan shop in Dong’e closed last summer for well over 6 months, I became obsessed with finding Lánzhōu Lā Mǐan shops everywhere I traveled, not just any old beef noodle shop. I also started researching to find out what made the Lanzhou noodle soup so delicious and consistent wherever I had it. I enjoy making Italian noodles and decided a bucket list item for me was learning to hand-pull noodles. I always watched the noodle maker at my local noodle shop. It really didn’t look that hard. I watched many YouTube videos and had also purchased a book, “The Mystery of Noodles” while I was in Suzhou. The book, written in Chinese doesn’t do me a whole lot of good but has great photos. Well, I finally decided I needed to just make some dough and give it a whirl. I was a bit surprised how little information, in English anyways, there was on the internet as far as recipes, particularly for the noodle dough. Basically, what I discovered, it was a simple mix of flour, water, and salt, so I thought. Although some articles mentioned baking soda, baked baking soda and lye water. I went with the basic flour, salt, and water. I determined it should be kneaded for 20 to 30 minutes and then let rest for up to six hours or overnight. Really, the noodle shops always have giant piles of dough they grab a hunk, twirl, slam, stretch, fold and finally pull. Made my dough, kneaded for 30 minutes and let it rest for 6 hours as I had errands to do. I returned home, kneaded some more and started to pull…….didn’t pull it more than 4 or 6 inches before it broke. Kneaded some more and put it to rest overnight while I did some more research.

There are several styles of twisting the dough but they all employ the same concept: a piece of dough is repeatedly stretched and folded onto itself in order to align the glutens and warm up the dough for stretching. Then it is rolled out to a workable thickness and cut into workable portions. The end pieces of the starting dough are never used because the glutens are not as aligned as the middle pieces. Gee, guess I should have paid more attention in chemistry and physics, who knew noodle making was so scientific. So, I twisted and stretched and folded till my wrists ached……no luck. Maybe there was something to the baking soda or lye water, which doesn’t sound exactly healthy. At this point, I decided to pack up my dough and take it to the noodle shop. I have google translate, no problem. He took one look at my dough, gave it a poke and shook his head. He said my dough was too soft and it needed “limestone” or at least that’s what the translation said. He also told me he studied the making of the soup and noodles for 1 year. I thought I better at least eat lunch while I was there and I saved the google translate Chinese part from him to take to the supermarket to find “limestone”. I showed them the Chinese that the noodle shop had told me. They said ahhhh, peng hui, and then said Lā Mǐan, so I knew I was on the right track. The girls I was speaking with told me 没有 méiyǒu, meaning they had none. I then asked them where I could get it simply by using the word哪里 nǎlǐ which means where. They sent me to go to the old vegetable market. The miracle of miracles, the first shop I went to had it. 2 bags for 8 RMB or $1.25. Ok, I better stop back at the noodle shop and find out how much to add to my mix. The noodle maker happened to be outside the shop when I arrived. Peng hui comes in a powder form. Through my translator, I asked how much to add if I use 500 grams of flour. He shook his head and tried to explain something to me. Finally, he took me into the shop and gave me a big hunk of dough and then instructed me to wait as he put some water in a bottle. I had my answer. You mix the peng hui with water and keep it on hand. The water is added to the dough and this is what breaks down the glutens and gives the dough elasticity. Okay, I don’t quite have the whole answer as I need to experiment as to how much of the peng hui/alkali water to add. But what a difference between his dough with the peng hui and mine. I do know that the amount you add must be small because it has a strong sulfur smell. Also, finding out the name peng hui, I was able to get more information from the internet. I hope to spend some time at the shop observing. Interestingly, from what I understand, peng hui is not available in the USA. I did find it on aliexpress shopping. The two bags I purchased for $1.25 were $45 online and currently unavailable.

Penghui originally comes from a plant called jianpengcao 碱蓬草 (Suaeda glauca) that grows in the highlands of Alashan (north of Lower Gansu, in Ningxia and Inner Mongolia). After this plant has been charred in a pit for several hours it is compressed into a dark crystal block. That is later processed with water to make a solution that noodle pullers use on mixed dough. Now that I know the “secret” to the dough, along with practicing pulling noodles, I am now working on the broth, which also has certain rules or ingredients. I may not have mastered the hand pulling of noodles by the time I get to Warren, Ohio in July, but even if I make the broth and used handmade, not pulled, noodles, you might understand my addiction. I will leave you with the recipe I found from Wei of Red House Spice. https://redhousespice.com/lanzhou-beef-noodle-soup/

You will also need

Add the rest of the chili mixture when the bubbling calms down. Stir well with a clean dry spoon.