From Russia With Love, Part II or A 4 Hour Drive From Moscow to a “Golden Ring” Town

I have decided to jump to nearly the end of my journey in Russia and a visit to the small, ancient countryside town of Sudzal.  Probably nothing profound in the post, but just sharing some more of the history and beauty of the country I knew so little about.

Northeast of Moscow is a ring of ancient cities known as “The Golden Ring”.  These towns played a significant role in the formation of the Russian Orthodox Church.  The town of Sudzal, on the banks of the Volga River, is one of the oldest Russian towns dating to the 12th century.  It is also currently the smallest of the Golden Ring towns with a population of just under 10,000.   The last post, I introduced Yulia.  Yulia was my host, along with her mother, while I was in Russia.  She was also my roommate when I lived in Changning in Hunan Province.  Yulia’s father offered to drive us 4 hours to the town of Suzdal.  He wanted me to experience the Russian countryside. 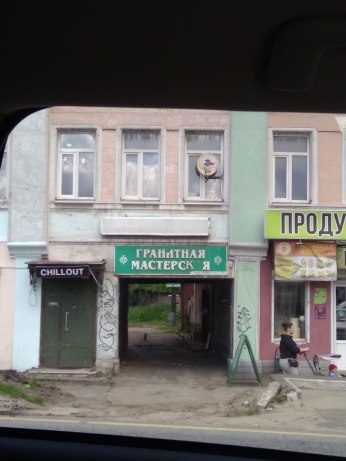 On a beautiful morning with sapphire blue skies and sunshine, Yulia’s father picked us up bright and early to start our journey.  Note, I am a couple (insert a cough cough) years older than Yulia’s father.  For some reason, in his eyes, he had a couple of 10-year-old daughters on a drive in the country…..cotton candy, cheese puffs, and a giant pink stuffed rabbit just for me.  I giggled and said, “thank you”.  Yes, the pink stuffed rabbit traveled back to the USA with me when I left Moscow for Beijing and then on to the states.

Where we stopped for breakfast 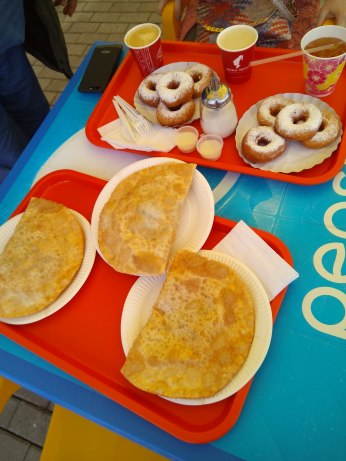 With his 2 “little” girls in the back seat, we started out on our journey.  When we were outside of the hustle and bustle of Moscow traffic, we made our first stop of the day at a small roadside restaurant.  Here we had coffee homemade donuts and chebureki.  Chebureki is a deep fried turnover stuffed with minced meat, onions, and dill.  It was amazingly delicious.  We ate and continued our journey through the sleepy countryside.  I was enjoying the picturesque scenery dotted with the onion domes of Russian Churches when after about an hour, dad pulled to the side of the road and jumped out of the car.  He trotted to what looked like a roadside vendor.  He returned to the car with the infamous giant pink rabbit for me and cotton candy and cheese puffs for both me and Yulia.  It was at this point I realized that for today whenever we were with “dad”, I wasn’t a 54, at the time, year old woman, but a young girl on a drive in the country. Thank goodness I was a grownup again when we went to dinner as we sampled several types of Russian alcoholic beverages. 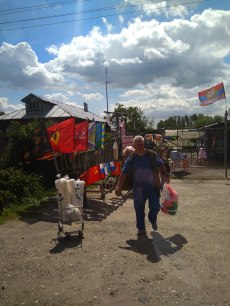 “Dad” returning with our “stuff” 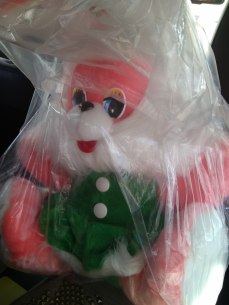 Arrival in Sudzal, Yulia had arranged for young and handsome Alexander to spend about 4 hours showing us around and giving us the history of the town.  I won’t get into everything he covered or this will become a long and possibly boring post, but I would like to hit the highlights.   Again, Russia surprised me and I fell in love.  In my mind’s eye, Russia was a cold, grey, unwelcoming country.  Each day I spent in the former Soviet Union as I remember it being called, I realized what I thought about Russia was entirely wrong.  It is a warm, (I’m not talking climate because Yulia tells me Russian winters are brutal), beautiful country which is full of history and culture. 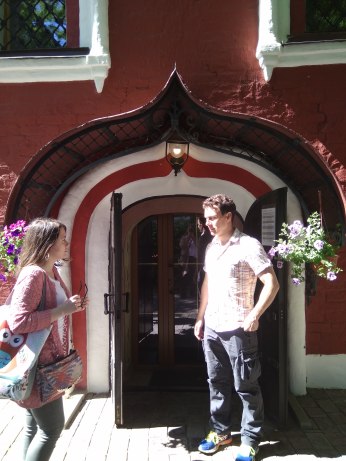 Just some old cars we passed.

Me, stopping for a pickle.

Alexander started our walking tour at the sight of the Kremlin, now basically a hill.  The Kremlin sight is also home to the Cathedral of the Nativity.  Without going into a lot of detail, Sudzal is home to 305 monuments, 30 churches, 14 bell towers, and 5 monasteries and convents.  We visited the Convent of the Intercession, founded in 1364, where it is said in 1698, Peter the Great had his wife exiled after they divorced.  Alexander continued to share the history as we toured many of the sights, including climbing to the top of one of the Bell Towers which is being restored.  After getting past the babushka wearing lady at the entrance, we made our way to the top for a beautiful view of the Russian countryside.  This was our final sight to visit and Alexander returned us to Yulia’s waiting father. 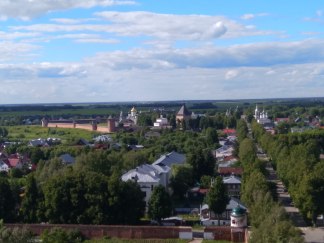 I am inserting an FYI here, just because I found it interesting.  I noticed that often throughout the countryside, I saw 2 churches right next to each other.  Alexander asked if I knew why this was. My first thought was male and female. That possibly there were times men and women could not attend church together.  Wrong!  One church is generally smaller and “closer to the ground”.  The second church is sometimes larger with soaring, often onion dome, steeples.  The smaller church was easier to heat being low to the ground, so it was the winter church.  The usually taller, larger church was the summer church. Bottom line, one is heated, one is not. 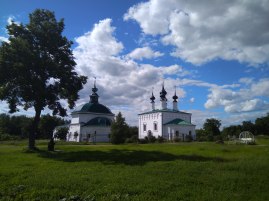 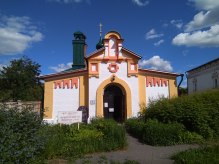 Our “dad” suggested we eat in Sudzal for some typical local dishes and alcohol. This was fine by me.   Alexander directed us to a lovely restaurant where we had a nice table on the porch. I can’t tell you all the food we consumed as I didn’t take notes.  I just know I got a taste of very traditional local food.  I also know that I was not a fan of the caviar ordered by Yulia’s father.  It was served on a bed of shredded beets. We had a couple of appetizer platters with bread, meat, cheeses, veggies and a lot of dill. I had a chicken dish with a sour cream sauce and mashed potatoes that was out of this world.  Yulia had a meat stew.  Before the meal even started, I had 4 “traditional” alcoholic beverages in front of me.  One was a honey mead and the others were vodka based and infused with local herbs or fruit. If I recall, I slept on a bit of the long journey home. 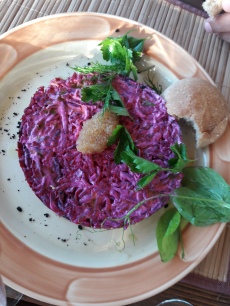 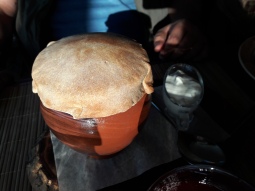 We finished our meal and started the drive back to Dolgoprudny.  We had daylight during much of the journey home as the sun doesn’t set until nearly 10 pm.  Of course, it gets daylight around 4 am also.  We finally made it home around 11:30 pm.  Me with my pink rabbit in tow, we were both ready to fall into the bed for the night as we walked about 18 km over the course of the day.  I was very grateful to Yulia and her father for taking the long trip into the historic countryside.  It gave me a totally different view of the country I knew so little about.

James Michener said,  “If you reject the food, ignore the customs, fear the religion and avoid the people, you might better stay at home”.  My eyes have been opened to the food, customs, religion, and people of Russia. What a beautiful, warm country.  I hope to see more of it in the future.

Some random photos from our day……. 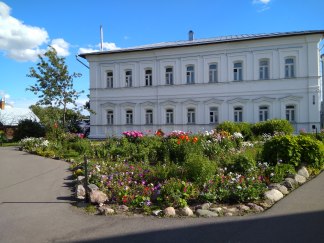 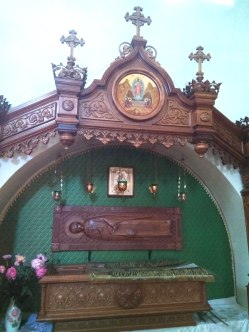 2 thoughts on “From Russia With Love, Part II or A 4 Hour Drive From Moscow to a “Golden Ring” Town”