China, Zhōngguó, PRC, the Middle Kingdom, a country of nearly 1.4 billion people…..1 in 5 people in the world is Chinese……it’s the place I currently call home.

Living in China for going on 4 years, I am expecting my first visitor from the USA.  I decided a blog of some essential things you should know, some fun things, some bizarre things and some things you really didn’t want to know should be my next topic.  So, Debbie, this blog is dedicated to you.

First and foremost, you need a Visa to enter China.  To obtain this Visa, you need a letter of invitation from a Chinese citizen or a complete itinerary including flights and hotels confirmations for every city you plan to visit during your stay.  You can apply for a Visa through a 3rd party agency or take it to the Chinese Embassy in your home country along with all the necessary documents and of course money.

You have your Visa in your hot little hands, now what?  Before leaving your home country, it is a good idea to download a few apps for your smartphone.  If you plan to use Facebook, Instagram or any Google apps, you will need to download a VPN or Virtual Private Network as these, and many other apps/websites are banned in China. VPN’s can be difficult to download after you arrive in China.  It is also advisable to download a translation app.  Google Translate and Dear Translate powered by Youdau are two I use.  Wēixìn or WeChat as it is known in English is a Chinese multi-purpose messaging, social media and mobile payment app. It is China’s app for everything and was named by Forbes as one of the world’s most powerful apps.  These are the top 3 apps I recommend you download before you arrive in China.

Although it is becoming more widely used, most Chinese speak little to no English.  Learn a few words before you come and remember “Chinese” is not a language.  There are between 7 and 10 language groups in China with Mandarin being spoken by about 30% of the population.  It was designated the official language of China in 1913.  It is also known as Pǔtōnghuà which literally means common tongue or common speech.  Under these 7 to 10 language groups there are many dialects that fall into each group.  Under Mandarin alone, there are 8 sub-groups, with 48 different dialects.  It’s no wonder it is such a difficult language to learn without even getting into the tones.  Cantonese is another of the language groups that most people are familiar with.  Learning a few words, hello or nǐ hǎo (knee how), goodbye or zàijiàn (zi ji en) and thank you or xièxiè (shay shay) are 3 to get you started.  It’s also a good idea to learn basic numbers. This is especially important when dealing with taxi drivers and bargaining for items.

Water or shuǐ (schway) or specifically rè shuǐ or hot water becomes somewhat of a joke with westerners, but I’ll address that in a minute.  First and foremost, DO NOT DRINK TAP WATER IN CHINA!!   The locals don’t even drink the water.  Bottled water is readily available and cheap.  A sixteen-ounce bottle usually sells for about 2 rmb or $.30.  A five-liter bottle sells for between $1.50 and $2.00.  It’s not a problem brushing your teeth with tap water, just don’t guzzle a big swig.  Ok, back to “rè shuǐ”…..forget about getting bīng shuǐ (ice water) and you will be hard pressed to even find lěngshuǐ (cold water).  You may get room temperature water but be prepared to get hot water everywhere.  The first thing they will bring you in a Chinese restaurant is hot water or hot tea, even if it is in the heat of summer.  The Chinese believe hot water is beneficial for your health.  It does become a joke…. the “hot water cures everything”.  If you say you are getting a cold, the answer is, “drink more hot water”.  I have a headache, “drink more hot water”.  Even recovering from back surgery, my caregiver kept telling me, “drink more hot water”, you must keep your back warm, and so on, you get the picture.  Just be prepared to drink hot water.  You will get used to it. 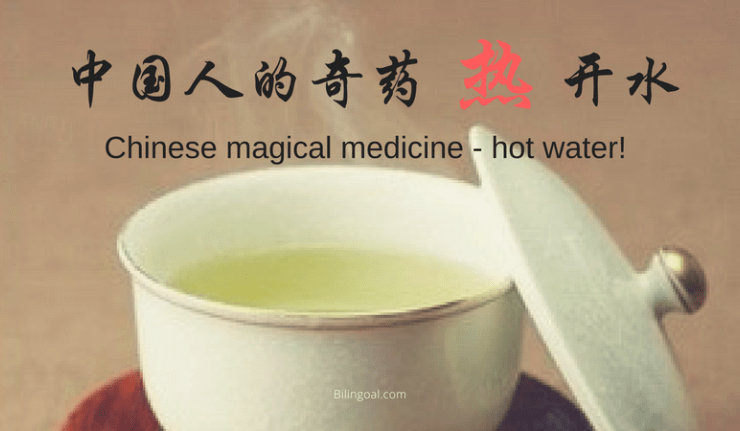 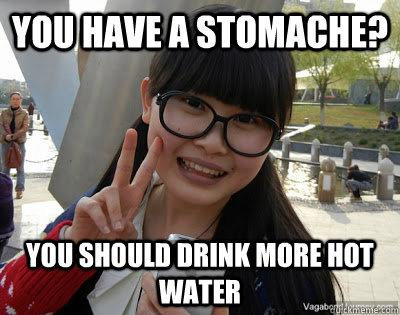 Now that you have consumed all that hot water……bathrooms in China….be prepared for the dreaded “squatty potty”.  You will have to use them….there is no avoiding them.  Although, I have a few tips for finding western toilets in airports and train stations.  Look for the handicap sign, most often they will have a western toilet.  Most hotels and upscale restaurants in bigger cities will also have western toilets.  Other than that, work those squat muscles. When I lived in Hunan Province my apartment only had a squatty potty.  About toilets, restrooms in China do not provide toilet paper.  Always carry your own.  Some may have a dispenser inside the restroom at the door, but not often. Always carry your own, I can’t emphasize that enough.  In some of the larger cities, they now have a TP dispenser at the restroom which uses facial recognition technology.  You get your allotted amount and can’t get more for a certain period of time.  Always carry your own!!!!  This is useful for restaurants also, always carry your own not only for restroom visits, but many restaurants do not provide napkins.  Before I close out the topic of toilets, Chinese children wear split pants while being potty trained.  This way, when nature calls, they can just squat and go.  Don’t be surprised if you see a parent holding a small child over a trash can to poop. 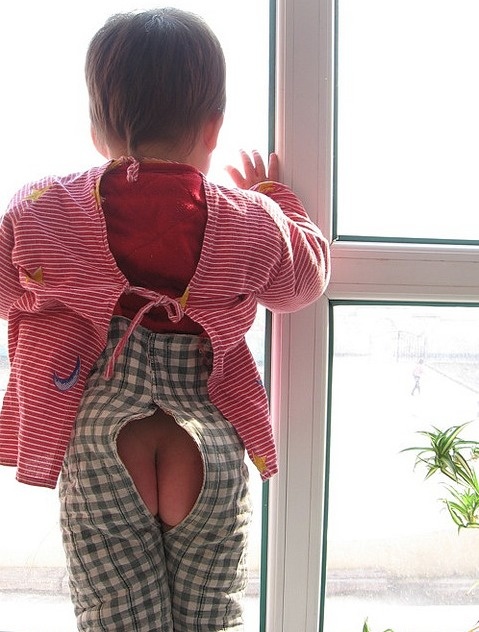 Etiquette…..don’t expect it to be the same as in the west.  Chinese people are naturally loud.  I guess with 1.4 billion people you need to be loud to make yourself heard.  They may appear to be arguing. They are probably just having a normal conversation using outside voices.  Queues, they don’t exist. If you are in line and let any space open, be prepared for someone to go in front of you. Every man for himself, I kid you not.  There is no such thing as personal space.  Don’t be surprised by spitting, burping and farting in public.  If you hear a big old haaawwwwkkkk, be prepared to see someone spit, it could be man, woman, or a little old grandma type.  People spit, that’s all I can say.  Don’t be surprised if you are out to dinner and happen to be eating, let’s say chicken.  Chicken is served by being chopped up with bones, skin, head, and feet.  It’s acceptable to spit the bones onto the table or even the floor.  Out to dinner, burping is normal.

Food in China….don’t expect Chinese food in China to be the same as in the USA or Europe.  There are no egg rolls, General Tso’s chicken,  egg foo yong or fortune cookies in China.  Expect to share all food at meals.  Unless you are in a noodle or other small shop, meals are not served individually.  Food is served family style usually on a large revolving table.  Whatever is in front of you, just grab some with your chopsticks and take a bite.  Sometimes, it’s best not to ask what it is….if you don’t like it, spit it out and don’t take anymore.  If you like it and want to know, ask after the meal, you may have eaten something unusual that would ruin the remainder of your meal. Don’t be surprised if there is a platter of fried bugs on the table like we would place a bowl of peanuts.  Don’t stick your chopsticks upright in a bowl of rice.  This would be offensive as it looks like incense sticks at a funeral.  You won’t need to tip the wait staff as there is no tipping in China.  Be prepared to see some exotic food at street markets and street vendors.  It’s perfectly normal to see a deep-fried scorpion and other bugs on a stick.  Starfish on a stick are popular also.  Of course, chicken feet are everywhere.

You can read my blog on Chinese food here: Who Was General Tso and Why Do Americans Eat His Chicken? 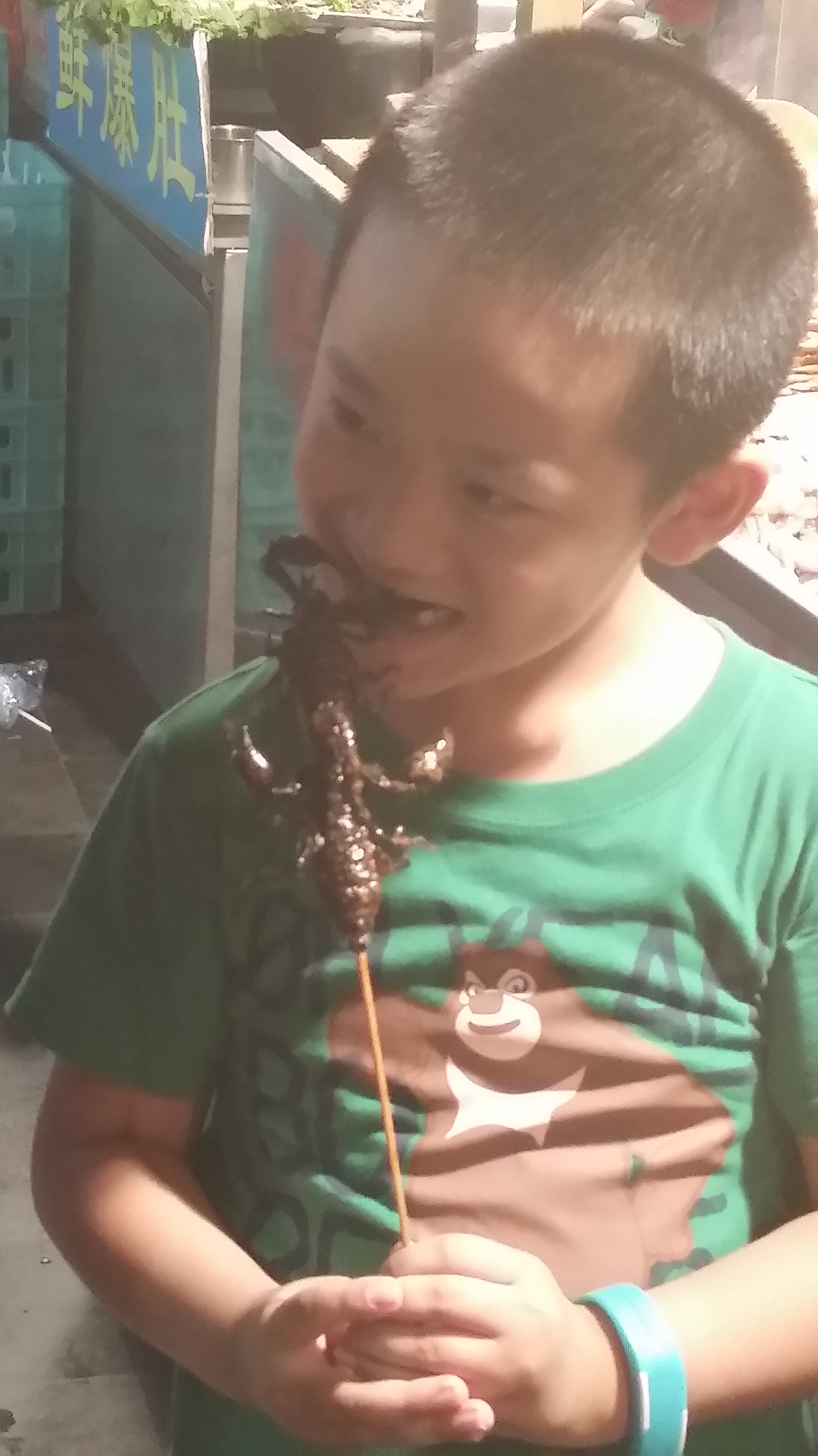 Now that I have either scared you away from visiting China or just made you more curious, here are just some fun, sometimes crazy facts:

The Great Wall of China is probably the most famous sight in China.  It is 8850 km or 5500 miles long and cannot be seen from space.

All of China is one time zone….Beijing Time

The Chinese Army is 2 million strong or roughly the population of Paris.

Urine Eggs are a delicacy. They are eggs boiled 24 hours in the urine of boys under the age of 10.

Over half the population of pigs in the world are in China.

All pandas in the world are owned by the People’s Republic of China.  They are on loan to zoos all over the world.  When a baby panda is born, it is shipped by FedEx back to China to expand the gene pool.

Stuck in a traffic jam, no problem, call a motorcycle taxi. 2 people will arrive on the motorcycle, one will stay in your car while the motorcycle whisks you to your destination.

Hotels in China can refuse foreigners.

China may have a pollution problem, but they are leading the world in green energy.

I think I have given you enough information on my take of life in China.  China is a wonderful country with wonderful people.  It is rich in culture and steeped in tradition.  It is also very different from what most westerners are used to.  If you choose to visit China, embrace the craziness. Embrace it because crazy to you is perfectly normal to someone else.  Accept the cultural differences, learn something about the culture and its history and you will probably end up discovering something about yourself.  As James Michener said, “If you reject the food, ignore the customs, fear the religion, and avoid the people, you might better stay at home”.