I have officially been in Dong’e  东阿县  for one week.  It has been a whirlwind week.  Being the only laowai 老外, foreigner, in about 50 miles, I have created quite a stir.  Evidently, they didn’t expect a foreign teacher to actually move to the city as I don’t really have a job right now, although I am getting paid and have been given a beautiful apartment.  I am eventually going to be teaching English to children at an Activity Center on Saturday and Sundays.  Currently I have been to a Kindergarten and a Chinese Youth Training Center where I have given several demo lessons to children and their parents.  During these “recruiting” sessions, Peter, my boss, who by the way is new to the business, signs kids up for the program.  When will it start?????  I have no answer.  Truth be told, my main activity has been going to dinners with various people in the community so they can meet me.

Let me try to explain a Chinese Business Dinner.  Anywhere from 4-12 people sit around a giant lazy susan table.

Massive amounts of food are brought out throughout the evening. The evening can last from 1.5 to 5+ hours during which you eat and drink baijiu, which I will address shortly, but first more on the dinner.  In many Chinese restaurants, tables are in individual rooms. Upon arrival to the room, no one can sit until the host arrives.  I was the “guest of honor” and there was a certain position at the table where I had to sit.  This position would be the center of the table facing east or facing the entrance to the room.   At your seat you will find you place setting which is shrink wrapped in cellophane. The setting includes a small plate, a small tea cup, a rice bowl, spoon and juice glass. A set of plastic wrapped chopsticks is separate.  Supposedly, they are shrink wrapped to ensure cleanliness. Unfortunately, this isn’t always the case.  So the first thing you do, after opening, is stack them plate first, rice bowl, tea cup, juice glass and spoon inside the juice glass.  Next you pour hot water or hot tea into the juice glass until it overflows into the teacup.  Dip your chopsticks into the juice glass, remove the spoon, dump the water onto the next layer and so forth, finally dumping the remainder of the water over the plate into the trash bin which is under the table.  Now that your dishes have been properly sanitized, someone at the table will pour everyone tea.

Let the feast begin.  Your small plate is placed in front of you, but it is there to basically eat over and catch any droppings.  At a dinner in China, you do not fill your plate, but merely take food with your chopsticks from whatever dish is in front of you and eat.  As more and more food is brought out the table is rotated by people at the table so all dishes get around to everyone. Basically it is communal eating.  By now the host has opened the baijiu and has filled everyone’s juice glass to the brim.   At some dinners, the women don’t drink baijiu, usually tea, fruit juice or beer (pijiu 啤酒).  At my first dinner, everyone drank baijiu, the host brought a case.  The host and then various people around the table will give a toast to welcome you.  You will either clink glasses or touch the glass to the table and nod if the person giving the toast is across the table from you.  If you hear the word “ganbei” 干杯, this literally translates to “dry cup” and is the Chinese version of “bottoms up”.  The tricky part of the dinner is pacing yourself as you must continue drinking until the host is finished.

Per the blog chinaslostpanda.com:  “As crazy as it may sound to some people, drinking (excessively) is a respectable quality in China.

It is even integrated in the Chinese language itself. The word 酒品 (jiupin) literally means “alcohol integrity”, and to some extent is believed to reflect the 人品 (renpin) “personal integrity”.

Drinking in China is therefore an indispensable social ritual. Not among college students, but among mature, grown up men. The goal is not to get wasted (even though it is hard to avoid), but to show that one is trustworthy and upright”.

My first dinner was with the owner of several kindergartens in Dong’e, Peter, some teachers and 3 educators from Beijing who were in town to do a training with the kindergarten teachers.  Let me tell you, they could handle their baijiu.  After my first juice glass of baijiu, Rich, the owner of the kindergarten, saw me sipping and then said I had to finish in 4 drinks, or the next 4 toasts.  It was a record night for me, 4 glasses of baijiu and I didn’t fall down the steps when we left.  Needless to say, I was invited to dinners the next 4 nights, all which included baijiu.  Luckily for me, after my first glass of baijiu, I convinced my hosts to let me switch to red wine.

So, you may ask, what exactly is baijiu 白酒?  My usual response is, “its Chinese hooch or moonshine”.  Literally it translates to “white alcohol”  In fact it’s a grain alcohol made from one or more of the following grains; sorghum, glutinous rice, wheat, barley or millet. It can even be made with corn and peas.  Legend has it that the first baijiu was accidentally made from cooked sorghum seeds (still usually the spirit’s base grain) that were left inside a hollow tree stump during the Xia Dynasty (2100 to 1600 BCE). Baijiu comes in several aromas or fragrances. Frankly, I can’t tell one from another, of course maybe if I went to a baijiu tasting, if there is such a thing. Rumor has it that baijiu is slowly working its way into mixed drinks in the western world.  Baijiu is found in nearly every Chinese home and at 1.8 billion strong it is the best selling liquor in the world. 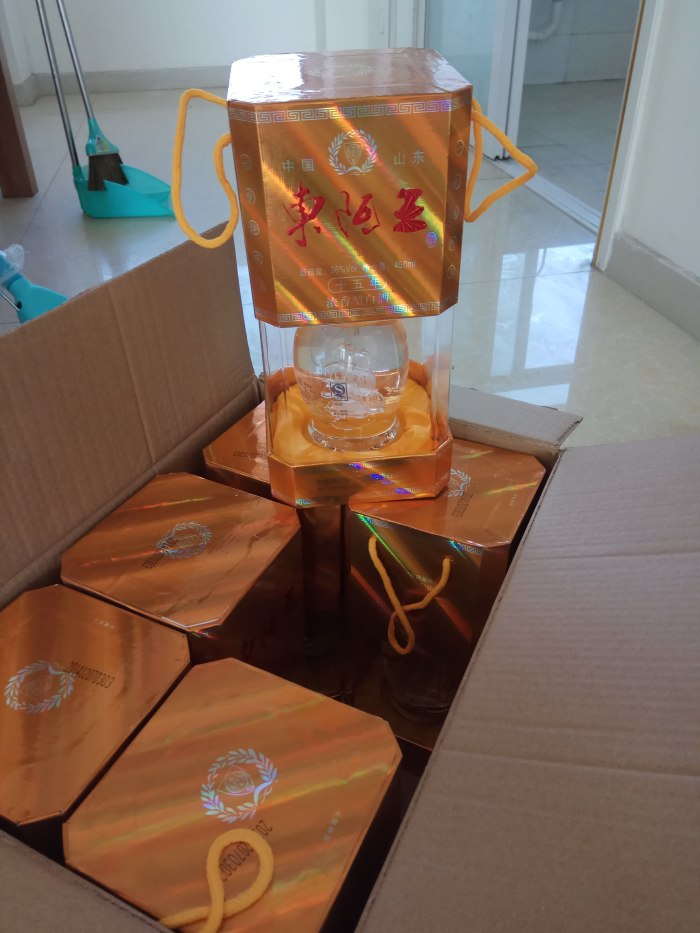 I received a box of baijiu as a housewarming gift here in Dong’e.  The bottles, by the way, are beautiful.  I have transitioned to my new city and have had my share of lessons in baijiu….until next time…Ganbei 干杯