I have pretty much settled into life in Dong’e County 东阿县.  Dong’e sits on the banks of the Yellow River or Huang He.  The Yellow River is the second longest in Asia and the sixth longest river system in the world.  I am lucky to have an apartment on the 24th (top) floor of a building overlooking the river and a beautiful park.  Dong’e County is made up of several small villages, of which I travel to two on Tuesdays to teach kindergarten in the countryside.  Total population of the county is 420,000 in 308 square miles. Definitely small by China standards.

The nearest big city, Liaocheng 聊城市, is about 22 miles away.  Liaocheng has a population of 5.8 million in 3,365 square miles.  The capital, of my province Shandong, is Jinan. Jinan 济南市 is about 60 miles from Dong’e and has a population of about 7 million in 3,157 square miles.  As you can tell, I live in a very small community. Now that you know a little about where I live, on to the “meat” of the story…..pun intended.

Dong’e is regionally and nationally known for the production of Ejiao 阿胶. Ejiao, aka donkey-hide gelatin or ass-hide glue, is obtained from the skin of the donkey by soaking and stewing.  Donkey-hide gelatin is made in other coastal provinces, but got the name Ejiao from Dong’e County. History tells that there is a well in Dong’e that was kept closed and sealed. It was only opened when water was taken to prepare Ejiao for the Emperor’s Court. I can actually see this well from my apartment.  Ejiao is considered one of the top 3 most important “herbs” in TCM, Traditional Chinese Medicine. For more info follow the link Ejiao. 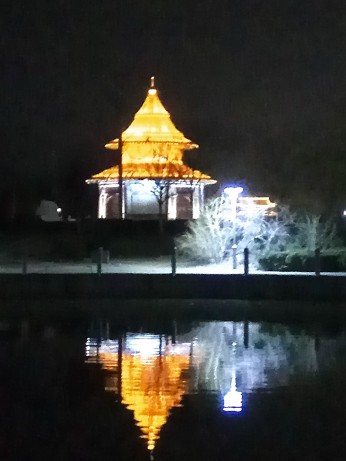 The Well at Night

Peter, my boss, also has a family business which makes wine.  They have several wines which contain Ejiao. Yes, I have drank them and no, it does not alter the taste of the wine.  If Peter hadn’t told me, I never would have known.

Okay, so Dong’e is known for production of Ejiao. I asked where these donkey’s are raised and are they raised only for their hide? Peter told me his cousin would take me to visit the donkey ranch.  This should be an adventure, I thought to myself, she speaks absolutely zero English and my Chinese, well, pitiful..  Having had dinner at their home earlier in the week, at least I had already spent some time with her and her husband.  She (I still don’t know her name) picked me up the next afternoon and off we went to the donkey ranch just outside of the city.  I have to say, it was quite nice and the donkeys seemed well cared for. After a few selfies with the donkey’s we headed back into town.  We stopped at a park, which I now overlook from my apartment, and spent a couple hours wandering around as there is an Ejiao Museum there.  I have no idea what she said to the guard at the gate, but we didn’t pay the 50 rmb entrance fee to the museum.  It was actually quite impressive. 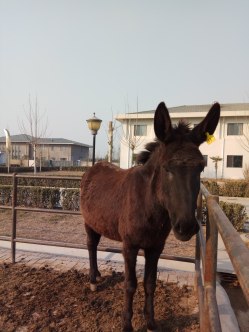 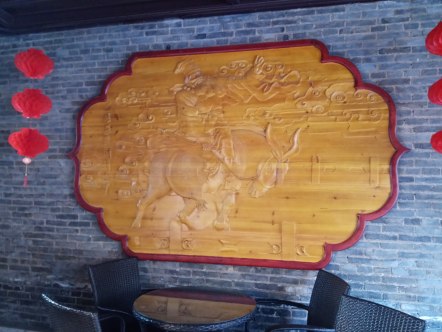 Luckily, WeChat (a highly used app in China, since FB is blocked) does a great job of translating.  She was taking me to her place of employment, The State Grid, the electric company.  She wanted me to meet her co-workers (she had taken the day off) and then we would wait on her husband to get off work and we would go to dinner.  Seriously, my first 10 days in this town were feeding frenzies. After I met EVERYONE who works with her and took 100’s of selfies with them, we  finally were ready to head to dinner.

Here is where I get to the “meat” of the story…..cousin, as I call her husband, insisted we go for donkey for dinner.  Having just visited a donkey ranch, this didn’t sit real well with me, although it did answer my earlier question, do they only raise donkeys for their hide.  Evidently, no, they also raise them for their meat.  They finally convinced me to go for a donkey meat dinner and I would at least try it. There would be many other things to eat if I didn’t like it.  Off we go to the restaurant. Peter was meeting us there along with his high school English teacher. As we were were sipping our Ejiao wine and a little Baijiu, the food started arriving.  There was a beautiful plate of, if I didn’t know better I would have thought to be roast beef, donkey. 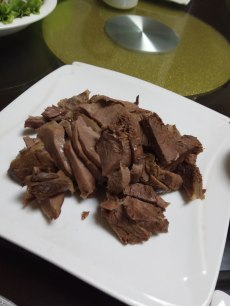 All I am going to say, and end it here…..I ate donkey and I liked, no, loved it.