One is Silver and the Other Gold

Summer 2021 has found me in the seaside town of Kiten, Bulgaria situated on the Black Sea. 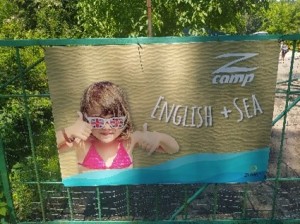 It is a resort town near the mouth of the Kiten river. It boasts two beaches, Atliman and Urdoviza.  So what has brought me from Warsaw, Poland to Kiten, Bulgaria?    Z Camp.

I was contacted by English Wizards and asked if I would be interested in working at an English Language and Sports Camp in Bulgaria. They had me at Bulgaria…

18 years ago, 4 young people from Gabrovo, Bulgaria came to Warren, Ohio USA, and the Trumbull County YMCA to spend one month working at the day camp.  I was privileged to host one of the teens in my home.  Of course, working at the YMCA and hosting, I got to know all 4 quite well and my partner and I even took them on a weekend excursion to Niagara Falls. Their time with us flew by and soon they returned to Bulgaria.  Despite promises of a visit and taking many trips to Europe, I never made it to Bulgaria.  However, one of the guys ended up coming to the states for university.  Here he met his future bride and is now living in Virginia, so I have seen Pavel in recent years.   Yani is currently living in Germany.  Hristian is in Bulgaria and will hopefully be able to visit. 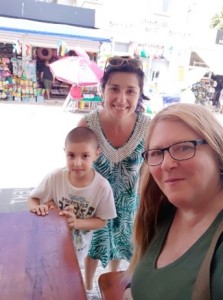 Tony is married with a son and another on the way in August.  She is living in Gabrovo.  Her husband and 6-year-old son were attending a karate camp near where my camp is located.  When she found out it was the same weekend I was arriving, she made the 3.5-hour trip to spend the afternoon with me.  They picked me up at my camp and took me shopping for a few items I needed. Then we walked around town, had some pizza, and video chatted with another very special friend, Margie back in the states.  Her husband Steve made all the arrangements to bring the kids to the Trumbull County YMCA. We then returned to my hotel and spent some time sitting by the pool catching up.  I can’t tell you what it meant to me that she made this happen.  Our visit ended way too soon, and they had to get back to their camp and mine was starting the next day.

When this opportunity presented itself, I couldn’t say no.  So here I am…country number 38 of my travels and currently in week four of Z-Camp in Kiten, Bulgaria.

What could be better than spending part of your summer on the beautiful south coast of the Bulgarian Black Sea?  This year since we kicked our summer camp off on July 4th, which just happens to be American Independence Day, our first weekly theme was “The USA”.  As the campers arrived on Sunday, greeting old friends from prior camps, and meeting new friends who are experiencing Z Camp for the first time, the American Folk Song, “Make New Friends” came to mind.  “Make new friends, but keep the old, one is silver and the other gold. A circle’s round it has no end that’s how long I’m gonna be your friend.”  Eyes lit up, and smiles formed as campers saw friends they hadn’t seen in a year. Shy glances and eyes filled with wonder from new campers as they looked around and saw their home for the next couple of weeks.  Luggage was stowed in assigned rooms, phones were turned in, money was put in the “bank” and kids were in swimsuits and jumping in the crystal waters of the camp pool. I should mention here that this isn’t a typical camp you think about in the USA. Camps in Bulgaria are housed in hotels and make use of the hotel facilities and grounds. 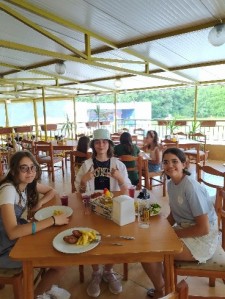 Soon it was dinnertime.  Everyone was famished because swimming can certainly make you hungry.  Old friends sitting together catching up, new campers getting accustomed to the routine and meeting other “newbies”, staff trying to make everyone feel welcome and laughter filled the air. After dinner, we gathered at the classroom area and everyone received their phone so they could call mom, dad, grandma, grandpa, or whoever they needed to let know that all was great at Z Camp.

Z-Campers turn their phones into staff at arrival and have access to them once a day, in the evening after dinner.  As the days went on, it was interesting to see that many didn’t even use their allotted time. They made their necessary calls, turned the phone back in, and got on with whatever activity they were engaged in.  Of course, there are some addicted to social media and had to post a daily tik tok or Instagram shot, but for the most part, I was surprised to see how easily they parted with their treasured smartphones.

The first evening activity was ice breakers.  This means time for fun!  Z Camp’s super-fabulous activity staff had plenty of great games planned.  We heard more laughter and saw more friendships being made. We even set off “sparklers” and shouted, “Happy 4th of July”.  However, the long day and excitement was catching up with our campers and yawns started becoming contagious.  Time for our first night’s sleep at camp.

Welcome to day one. Since Z Camp is an English and Sports Camp, one of the first things we did was test English levels.  Campers were split into four groups and one of the teaching staff administered the test.  Instructions were given in English and Bulgarian to make sure the campers all understand what they should do. 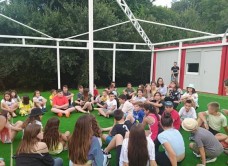 Everyone was happy when the testing was behind them because they knew that meant they would go to the beach in the afternoon. Lots of fun in the sun was followed by dinner and then evening activity which was a quiz night.  Time to see how much they knew about the USA.

We woke to rain on day 2 of camp.  By the way, wake up is 07:20 with breakfast at 07:50. After breakfast, it is usually beach time.  When it rains the itinerary is switched up a bit in hopes that the weather breaks and we can go to the beach or swim in the pool in the afternoon.  On a typical day, we have one English lesson in the morning and two after lunch.  This rainy day we had two lessons in the morning.  The testing the day before allowed the academic director to divide the kids into appropriate classrooms for their age and English level.  Also scheduled in a typical afternoon are sports activities, after all, Z Camp is a language and sports camp.

Anyways, you get the idea.  We get up…we have breakfast…we go to the beach…we have English lessons…we have lunch…we have two English lessons…we have an afternoon snack…we do sports…we have dinner…we have phone time…we have an evening activity…bedtime is 21:30 with lights out at 22:00.  There is a security person on duty overnight on the wings of the 2 floors boys on one, girls on the other) occupied by Z Camp and staff. Then on occasion, some of the staff sit at the outdoor pool bar and relaxes a bit after very active days.  As a side note, all staff isn’t present at all activities, we do have some needed downtime. 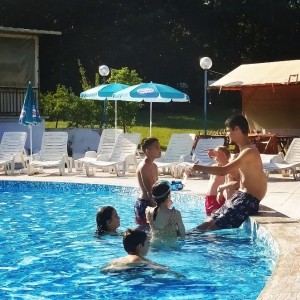 Since we have a rolling enrollment with some kids leaving on Saturday mornings and a new bunch arriving on Sunday afternoons, we have a new theme each week and switch up the activities as much as possible.  Kids stay two, three, or four weeks at a time so we do our best to keep it interesting.  Time certainly flies by at camp which is how I have arrived at week four in the blink of an eye.  We also take 2 off-site excursions each week.  I’ve taken you through a couple of typical days but now a little about some of our activities and excursions.

Did you know Bulgaria has a prehistoric rock formation just a few kilometers north of the city of Primorsko?  It is a natural rock formation consisting of megaliths of hardened magma that erupted from a Mesozoic era volcano.  If you don’t know what a megalith is, Z campers can tell you because they have been there.  A megalith is a large prehistoric stone that has been used to construct a structure or monument, either alone or together with other stones. … Most extant megaliths were erected between the Neolithic period. The site is an open-air museum maintained by the Burgas Historical Society. Beglik Tash is visited annually by 40,000 tourists and is affectionately called the Bulgarian Stonehenge by the locals.  It’s cool we could visit while at Z Camp.  It was great fun trying to squeeze through the crevices and climb around the rocks. 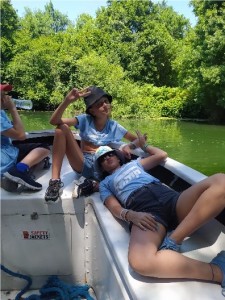 After leaving Beglik Tash we arrived at the Strandzha Nature Park, we had lunch, and then boarded a boat for an hour-long river cruise on the Veleka River. If you didn’t want to cruise you could paddle kayaks up and down the river. After the boat ride, we did some rifle shooting and then back in the boats for a water gun fight. Everyone returned to shore soaked to the skin. Veleka River is part of Sredna Gora Tectonic Zone in Strandzha Natural Park. It empties into the Black Sea.

During the week the campers can also choose from a variety of sports activities, including volleyball, windsurfing, football, tennis, horseback riding, and swimming.  Evening activities range from movie night, karaoke, board games, and quizzes to a murder mystery night. 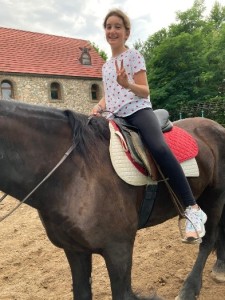 Four weeks have flown by.  I started this blog with a story from 18 years ago.  I had just had a visit from one of the four “kids” who came from Gabrovo, Bulgaria to Warren, Ohio.  It seems fitting that I should end it today with a visit from another one of those kids.  Hristian and his girlfriend Dessi decided to take a holiday at the sea.  They were staying in the nearby town of Sozopol so Hristian would be able to visit.  We shed a few tears and shared a lot of laughs.  It is amazing and I am blessed that after 18 years it feels like yesterday.  We met up in Kiten and had lunch at the seaside. We then went for a cocktail and had a video chat with Margie back in the states.  I’m good at catching her just as she is waking, sorry Margie.  I think she forgives me.  We didn’t say goodbye but see you soon as we made plans for me to visit Veliko Tarnovo and stay with Hristian before going to Sofia to catch my flight to Cairo. 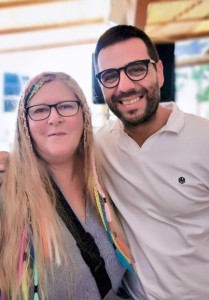 I am truly blessed to have met these young people 18 years ago.  I am fortunate to have traveled to 38 countries of this beautiful world and met people I may never see again but consider my friends. I have met people I consider family.  I never thought I would get to Bulgaria yet here I am at a summer camp teaching English.  I have great co-workers and have shared laughs and tears.  I think of my friends and family back in the states and sharing these moments with them.  As Nishan Panwar said, “Sometimes it’s not about the journey or the destination, but the people you meet along the way.”

“Make new friends, but keep the old, one is silver and the other gold. A circle’s round it has no end that’s how long I’m gonna be your friend.”

10 thoughts on “One is Silver and the Other Gold”